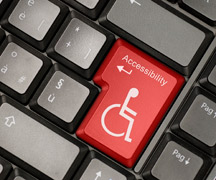 When Vickie Peirano-Thompson’s employer told her they’d be turning to people with disabilities to fuel their workforce, she was skeptical.

But, she said, the company discovered “there are all kinds of technologies out there to accommodate all sorts of disabilities.”

Peirano-Thompson spoke about accommodating workers with disabilities during a recent webinar titled “Assistive Technology, Capturing the Ability and Skill Within Your Organization.” The webinar was sponsored by The Sierra Group, Inc., a national consultancy operating in the areas of workforce strategy, vocational rehabilitation and candidate sourcing.

UCB developed an interview team, a training team, and an accommodation team. It went to employees and asked them about their concerns.

“We got everybody to buy into this,” she said.

The company has employees who are blind and who use sophisticated screen-reading software to perform their jobs.

His performance motivates other employees, she said. “Actually it has brought morale up in my office, the productivity has come up in my office, and people work together as a team,” she said. UCB was so successful in 2009 that the Ohio Governor’s Council on People with Disabilities lauded it as employer of the year.

It’s not that expensive, either.

“Our data shows that a really high percentage of accommodations cost absolutely nothing to make … while the rest typically cost $600,” said Beth Loy, principal consultant for the Job Accommodation Network. It provides free, expert and confidential guidance on workplace accommodations and disability employment issues.

“There is not a significant difference in the cost of the accommodations that involve assistive technology compared to other types of accommodations. And certainly the benefits outweigh the costs.” The benefits can be great for companies that accommodate those with disabilities, according to the webinar speakers. There are many companies that provide the equipment free, and there are tax incentives.

“There have been some really exciting developments in screen-reading software … a screen reader is a type of program that can be installed on a computer to read accessible documents and web sites to someone who is blind or who has vision loss,” Loy said.

“Recently screen readers have become mobile and user friendly with our smart phone technologies, which many of us can’t do without.”

BlackBerry and iPhones have screen readers, she said, “so your BlackBerry can talk to you.”

One program for BlackBerry, Oratio, costs $449.

“It’s a really cheap accommodation in order to be able to be mobile and read your e-mail and do other things with that BlackBerry.” Standard on Mac’s, the iPhone’s VoiceOver screen reader is a standard feature on iPhone 4 and iPhone 3GS.

Speech recognition software allows someone with a disability to speak to their computers and have it converted to text.

“One drawback is it picks up background noise and it cannot be used in environments where confidentiality is needed because the person is speaking things aloud that others can hear.”

However, individuals can use a “steno mask system” that enables them to speak into the mask that is hooked into a computer. The user cannot be heard and background noises are eliminated.

New technologies allow for video relay to be done using a video phone for “about the same price as a mobile phone and you can get that service for free,” Loy said.

She noted, too, that newer iPhones and the new iTouch have a feature called FaceTime. “What this does is basically expand video conferencing to mobile technology,” she said. “It’s actually being marketed as a means for people who are deaf to communicate remotely through sign language,” she said, adding “I think that we’re seeing a huge cross-over between assistive technology and technology that anyone can use.”

Michael Fiore, The Sierra Group’s CFO, concurred. As technology improves, “the line between technology and accommodation gets blurrier every day,” he said. “And there are more things that can help us all.”